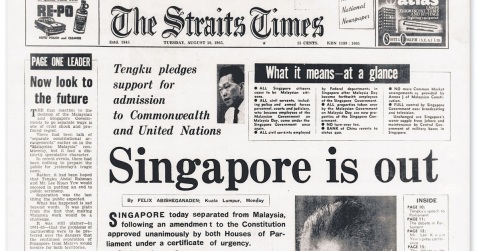 The separation with Malaya played an important part in making Singapore grow as an independent country.Despite the difficulties, it was a milestone as this was the first time the country had been free from rule in many years, and finally been given full authority. The separation allowed Singapore to be responsible of  her own economy, and leaders had to learn how to ensure the security of the people and instill a sense of belonging among them. When Singapore gained independence, other countries recognized her as a republic country and offered help to Singapore on friendly terms but some countries were doubtful of our survival on our own.
Reactions

After the separation, the political leaders were greatly disappointed and shocked, because they had worked extremely hard for the merger and believed that despite the tension they could not split. They were also worried since Singapore had a lack of natural resources and no army. Some citizens shared the same feelings of utter shock and disbelief at the separation,and felt that Singapore had no hope. They were also saddened, because they could no longer stay in close contact with family in Malaysia. On the other hand people not affected by the separation had no reaction to it.

Singapore’s independence did not come easy and it brought forth many challenges.One of them was security.Singapore did not have its own military,and law and order was not strong as well.In the early stages of Singapore’s independence,she was repeatedly attacked by Indonesia as part of the ‘konfrontasi’ policy.Southeast Asia was also experiencing instability at this time.As such,Dr Goh Keng Swee established the National Service system to strengthen Singapore’s armed forces quickly.Another issue was ensuring economic survival.Singapore had no natural resources and thus it had to rely on trade for them.There was also a severe lack of unemployment at that time.As such,Singapore had to develop a diversified economy along with relying on trade for economic survival.The last problem was instilling a sense of belonging in Singapore’s citizens.This was because most people in Singapore had come from Malaysia.To resolve this,the government made appeals and urged locals to get Singapore citizenship.

Overall,the independence of Singapore was a significant milestone for the people of the country. It brought many challenges but we managed to overcome them and develop Singapore to what it is today.

( Sorry for our late submission!)